The following is a glossary of terms used throughout the archive. Entries include: organizations and institutions that created or currently hold items included in the archive, common terms used in anti-VD propaganda, or important publications or people related to venereal disease control. 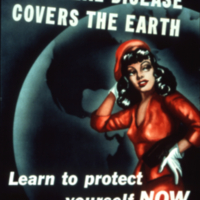 American Social Hygiene Association. This organization was the primary national organization concerned with social hygiene issues in the 1930s and 1940s. As such they were an important partner for Parran and the USPHS in the anti-VD campaign and created and promoted many of the items in the archive.

While the ASHA emphasized the importance of medical and public health approaches to controlling VD, especially during the 1930s, the organization was concerned with social hygiene more broadly, including the repression of prostitution, the promotion of adequate sexual education, and the strengthening of families and communities.

"Bad blood" was a term used by African American communities to refer to syphilis and other illnesses. Public health and social hygiene workers sometimes used this term when working with black communities instead of using the word "syphilis." Many people looking back have been critical of this practice, seeing it as a demonstration of the paternalistic attitudes of medical professionals based the assumption that African Americans could only understand the simplist explanations about health and disease. In the case of the USPHS Syphilis Study at Tuskegee, many historians see the use of "bad blood" as something more insidious, an instance of lying to patients about their condition for the benefit of state-sponsered science. 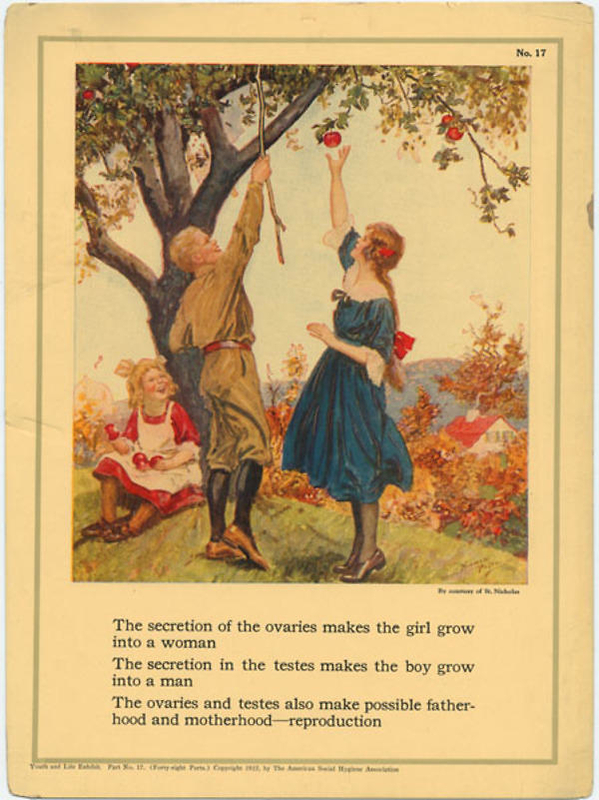 Cartoonist who created many anti-VD images for the ASHA.

Department of Health. This tag indicates that a state or local department of health was involved in the creation of an item.

The germ that causes gonnorhea.

Home Economics Archive: Research, Tradiation and History (HEARTH) at the Albert R. Mann Library, Cornell University. They have digitized the ASHA's periodical, The Journal of Social Hygiene (JSH), 1914-1954. A few images included in the archive were published in the JSH and I have not been able to find elsewhere.

The Journal of Social Hygiene. Periodical produced by the ASHA. See HEARTH entry.

Library of Congress. Holds many materials created by the US government.

An annual event organized by the ASHA to promote social hygiene, typically taking place over the first week in February. During this era, NSHD events often focused on the control of venereal disease, building on the efforts of the USPHS. While the ASHA would provide a theme for each year and produce many of the materials used at NSHD gatherings, state and local social hygiene societies put together most of the events.

National Archives and Records Administration. Holds many materials created by the US government.

Slang in the 1930/40s for a woman who spends time with and has sex with men she has just met. She allows herself to be "picked up" by men she does not know in public places like dance halls, bars, movie theaters, or on the street. This term was widely used in this era. 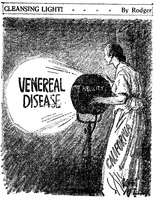 Prophylaxis refers to an actions and treatments that will prevent the contraction of disease. "Pro" was often used as a shorthand for prophylaxis in the 1940s materials directed at servicemen. In the 1930/40s there were three types of prophylaxis for venereal disease: behavioral, mechanical, and chemical. Behavioral refered to avoiding sexual contact. Mechanical refered to condom use. Chemical included washing genitals after sex and applying chemicals to the area. This methods was primiarily developed for men.

The military provided condoms and chemical prophylaxis via "Pro Kits" and at prophylaxis stations. The kits were issued to servicemen so they could have access to prophylaxis anywhere. The stations were typically on military bases, but some were also in areas of towns or cities that servicement frequented. The effectiveness and appropriateness of prophylaxis for civilians was debated at the time and generally not promoted in public health materials for general audiences.

Assisstant Surgeon General of the USPHS and head of the organization's Venereal Disease Division, 1933 to 1943.

Refers to efforts to control venereal disease, repress of prostitution, promote of adequate sexual education, and strengthen of families and communities. Sometimes this phrase was used as a euphemism for VD control in earlier eras. 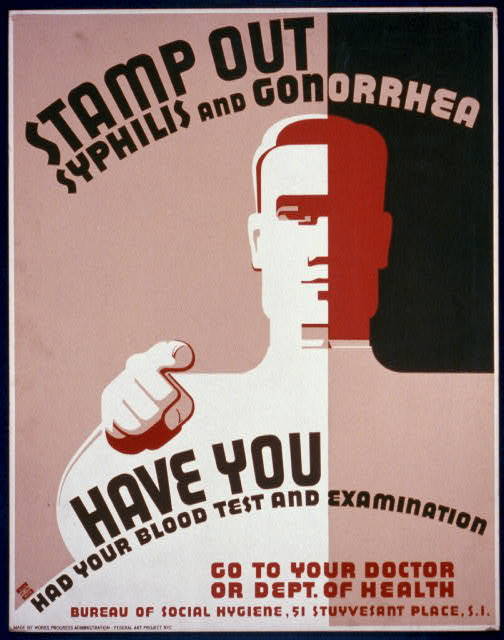 The germ that causes syphilis.

A progressive periodical that published articles about social issues, often with many visuals. Two of Parran's popular articles were first published in this magazine before they were reprinted.

Surgeon General of the USPHS, 1936 to 1948. As Surgeon General he was the face of the anti-syphilis campaign along with other health projects the USPHS undertook. His desire to focus on VD control and the attention he was able to garner for the issue was a significant reason why the government expanded the program in this era.

The digital archive of the University of Minnesota. Many of the ASHA papers can be found there.

United States Public Health Service. The main government agency responsible for the health of the American people. The head of the USPHS is the Surgeon General. (There is also a Surgeon General of the Army and Navy.) During this period, Surgeon General Parran and the USPHS led the anti-syphilis campaign of the 1930s and 40s.

A type of blood test used to detect syphilis. While other versions of this test were used in this period, such as the Kahn test, Wassermann was often used in materials to refer to any blood tests for syphilis.

Works Progress Administration. A major New Deal work relief program that lasted from 1935-1943. The WPA arts programs made many health posters, some about syphilis control.